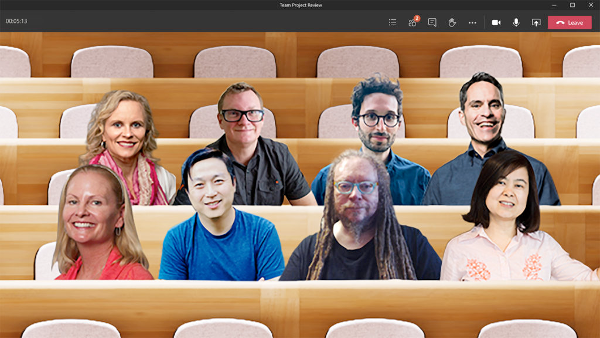 ‘Together’ can deliver a powerful focus group experience

Microsoft Teams has quietly gained a foothold in businesses as a reliable tool for video calling with colleagues, but it has amazing potential for focus groups and user research.

Teams integration with other Office products, reliability and clarity over wi-fi, high levels of security (banks use it) and simplicity of opening video calls have quickly made it a preferred solution for many businesses.

But one problem Teams suffered from was a group call interface with a maximum of 4 users. Some users would be put into a 4 square grid fairly randomly and others would not be shown at all.

It is a distinctly uncomfortable experience, creating a false sense of reality and reinforcing the notion that users are in remote locations. Many users would turn off the camera rather than be the centre of attention.

But since July 2020, Teams has rolled out an innovation called ‘Together’. This has been a huge success for Microsoft as it has completely reimagined the way we see ourselves and other users in a team call.

Together mode allows users to be placed in the same place – a location such as an auditorium, theatre or coffee shop. No more grids of people in distinct locations – instead, there is a sense that everyone is in the same place and looking at the same thing.

‘Together’ changes the whole experience for users. Without the individual background, users lose the sense that there is a physical boundary between them.

The mirror design means that everyone is looking in the same direction and so the brain does not notice the variable eye contact.

This means it is easier to tell how everyone is responding to each other resulting in more authentic dynamics for group discussions. This, in turn, results in more natural interactions with other users.

It has other benefits as well – less fatigue,  more interaction and less self-consciousness.

The Together feature is only available as a desktop client rather than a browser-based solution. This means users recruited for groups would need to sign up for Teams and download the software – but it’s free to do so.

You can read more about it here.

This feels like a turning point for research. At the moment Microsoft is rolling the feature out and having used it I can really feel how comfortable the experience is. We’ll be using this at Clicked for focus groups in future as part of the other services we offer.